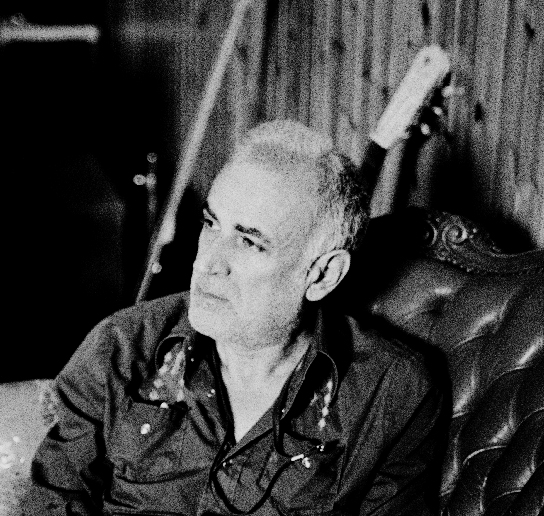 The real characteristic of Marco Lodola is a multifaceted nature, as demonstrated by the huge variety in his works and also by the number of artistic collaborations which figure in his rich curriculum vitae. His world, inhabited by faceless figures, dancers, sportsmen, musicians, wires and plastic materials, succeeds every time in entering into the heart of a city and dialoguing with its luminous adverts, bar signs and the urban environment in general.

Founder of the "New Futurism" movement in the 1980s together with a group of other artists, from 1983 he began to exhibit his Plexiglas figures in Italy and Europe. In December 1994 he accepted an invitation from the Government of the Republic of China to hold an exhibition in the Ex Archives of the Imperial city of Beijing.

In 1996 he began a programme of American exhibitions in Miami.

In 1997 he participated in a manifestation associated with the 47th Venice Biennale entitled "Unplosive art". He is also known by the wider Italian public for his collaborations with national cultural and entertainment celebrities.

His works were on display in the Italy Pavilion of the 53rd Venice Biennale with a luminous installation. He has also participated in projects for important industrial clients, taking care of their image and creating posters and logos (his "Tazzine ballerine" collection designed for "Illy caffe" in 1999 is particularly famous).

In 2003 he exhibited in the Palazzo delle Belle Arti in Brussels - he was also responsible for the exhibition's external facade. His "Controluce" exhibition in 2004 was transferred to San Paolo in Brazil, the Museo de Arte Moderna in Rio de Janeiro, Mexico City and the Museo Regional de Guadalajara.

Marco Lodola has continued to create scenery for films, programs, concerts and various events in Italy, from fashion to the theatre until nowadays.

In 2007 Milan hosted his personal "Lodolandia" exhibition in the Castello Sforzesco, accompanied by around twenty luminous sculptures in metal and polycarbonate boards which traced out an ideal route through the city's streets. The artist himself declared: "the term Lodolandia - in addition to representing a physical space-also represents a mental space, in that it gathers together all of the contaminations of the various disciplines which I am interested in, such as music, literature and all the other arts, not only painting and sculpture".

In 2011 his works are chosen by the designer Vivienne Westwood as a backdrop for the fashion show a / w man during the fashion week in Milan. Collaborate with Citroen for installation in Via della Spiga in Milan called “Full Electric Citroen.” He exhibited in London. His works participating in the Made in Italy in the World, during the Beijing Luxury Property Showcase With the New Futurism Group has exhibited in Rovereto at Casa Depero and in Milan at Spazio Oberdan.

In 2013, He had several exhibitions across Europe (Geneva, London and Portofino). In October 2013, on behalf of Class Horses he installed his light sculpture Pegaso. He made the sculpture Excalibur for 2014-2015 X-FACTOR’S season.

In April 2014, he exhibited in Moscow for Harmont & Blaine with an extraordinary godmother, Sofia Loren.

He illuminated the town of Castelnuovo Val di Cecina and set up the stage for the Stadio tour. He designed the set for the eleventh edition of Andrea Bocelli’s Teatro del Silenzio and for the film “Lasciati Andare” by Toni Servillo. In 2017 he sets up the stage for the concert by Danilo Rea, Gino Paoli and Paolo Rossi at the Fortezza Santa Barbara in Pistoia.

In 2018, on the 15th anniversary of the Blue Note, in Milan, he set up the façade and installed sculptures inside. In the summer of 2018, he exhibited at the Royal Palace of Caserta a series of luminous sculptures, in the “Tempus-Time” exhibition curated by Luca Beatrice.

In 2020 he opens the exhibition “The Garden of Luminous Dreams” in the garden of Piazza Partigiani in Alassio at the famous “Muretto of Alassio” tribute to Miss Muretto with the participation of Simona Ventura.

He renews the facade of the Ariston theater in Sanremo on the occasion of 75th anniversary of the Festival, also realize a tribute to Domenico Modugno with a life-size sculpture at the entrance of the theater.

the “Luminous Nativity” opens inside the Varano of the Uffizi Gallery in Florence.

In 2021 he realizes the commemorative work for the 75 years of the Vespa at the Piaggio Museum in Pontedera.

He set up the facades and windows of Christian Dior stores in Paris, Rome, New York and Singapore. Check for more in News section “When art meets fashion”.

Marco Lodola is set apart by his capacity to merge art with other disciplines: literature, music, cinema, design. The theme which he has covered most and which most characterises his style over the course of his career is that of dance and dancers, who are often part of frames from musicals of the past.

Using the immediacy of colours and the linear nature of forms - easily understood by all - Lodola addresses the same public as that of the cinema, television, advertisements and music, seeking contamination between the various artistic disciplines in order to draw from it new impulses and creative stimulus while attempting to adapt the times and methods of art to those of contemporary life. 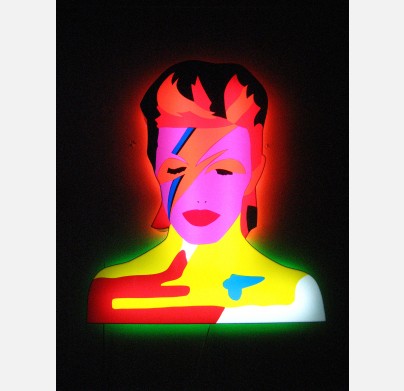 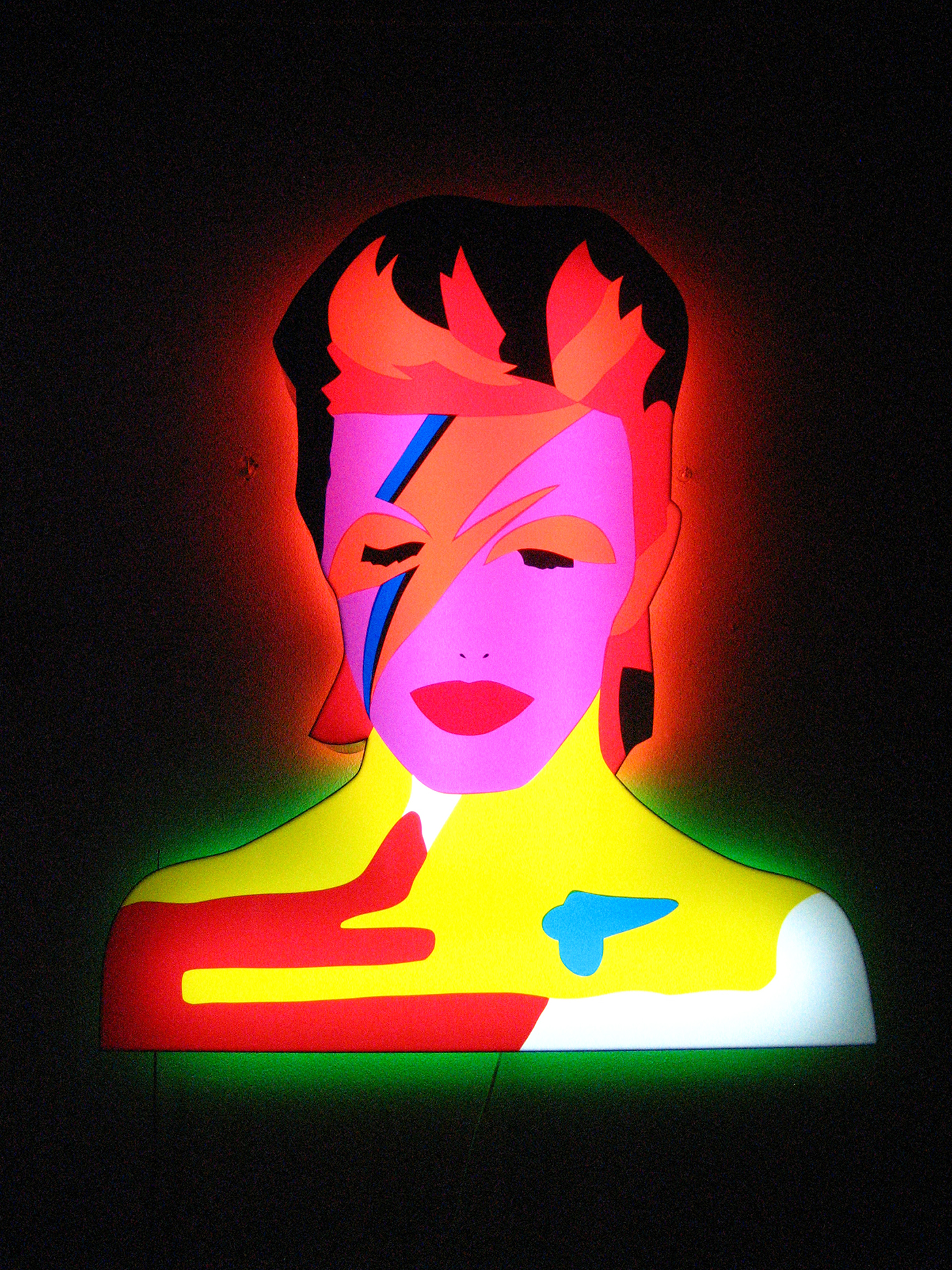 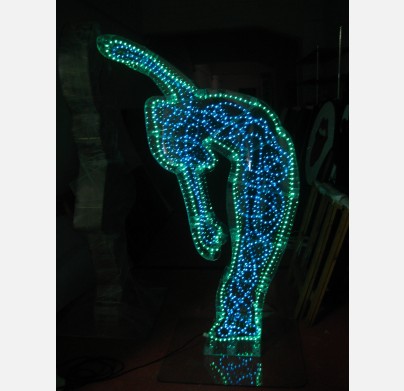 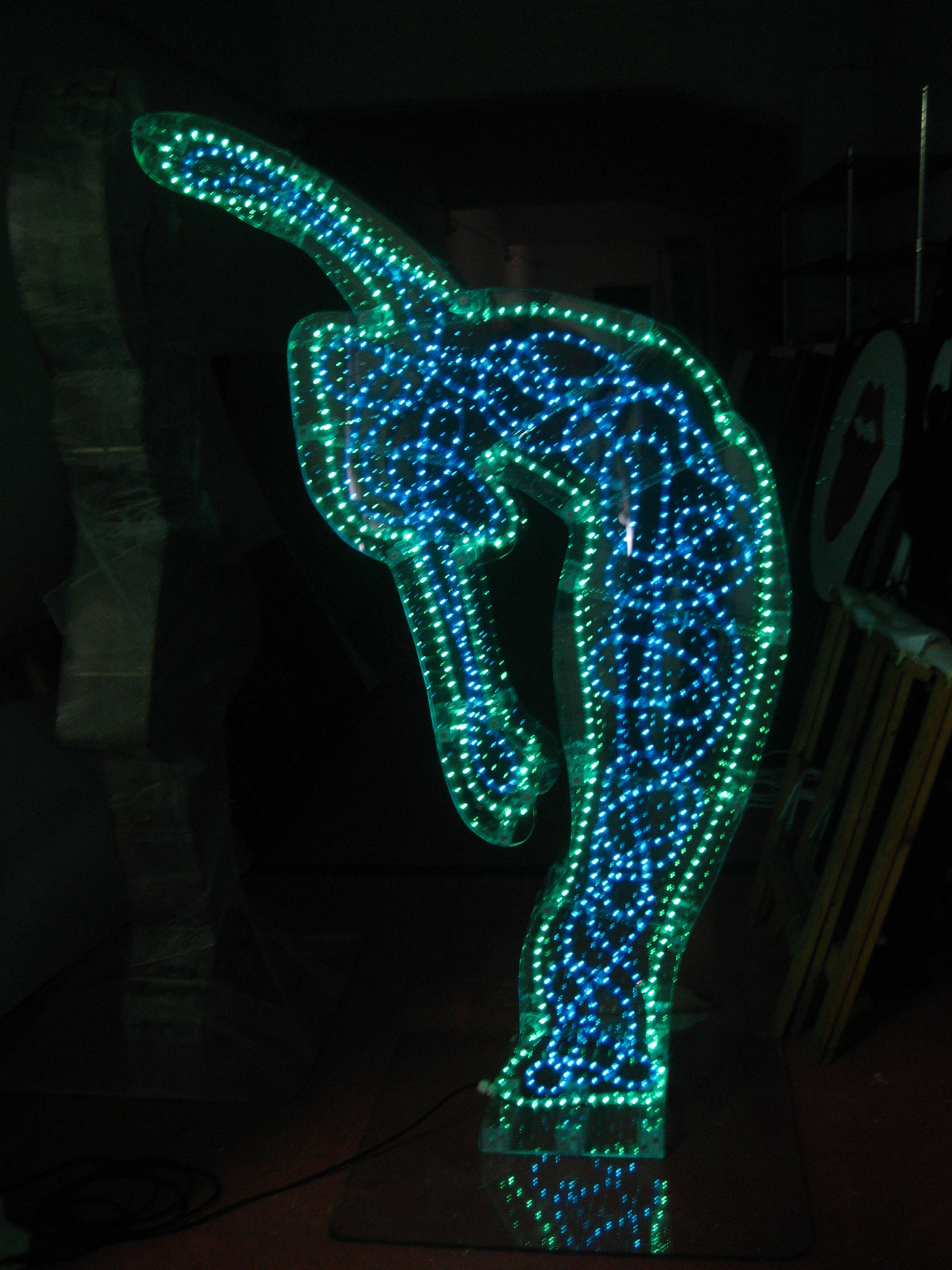 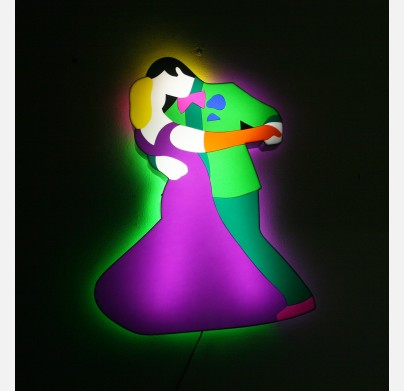 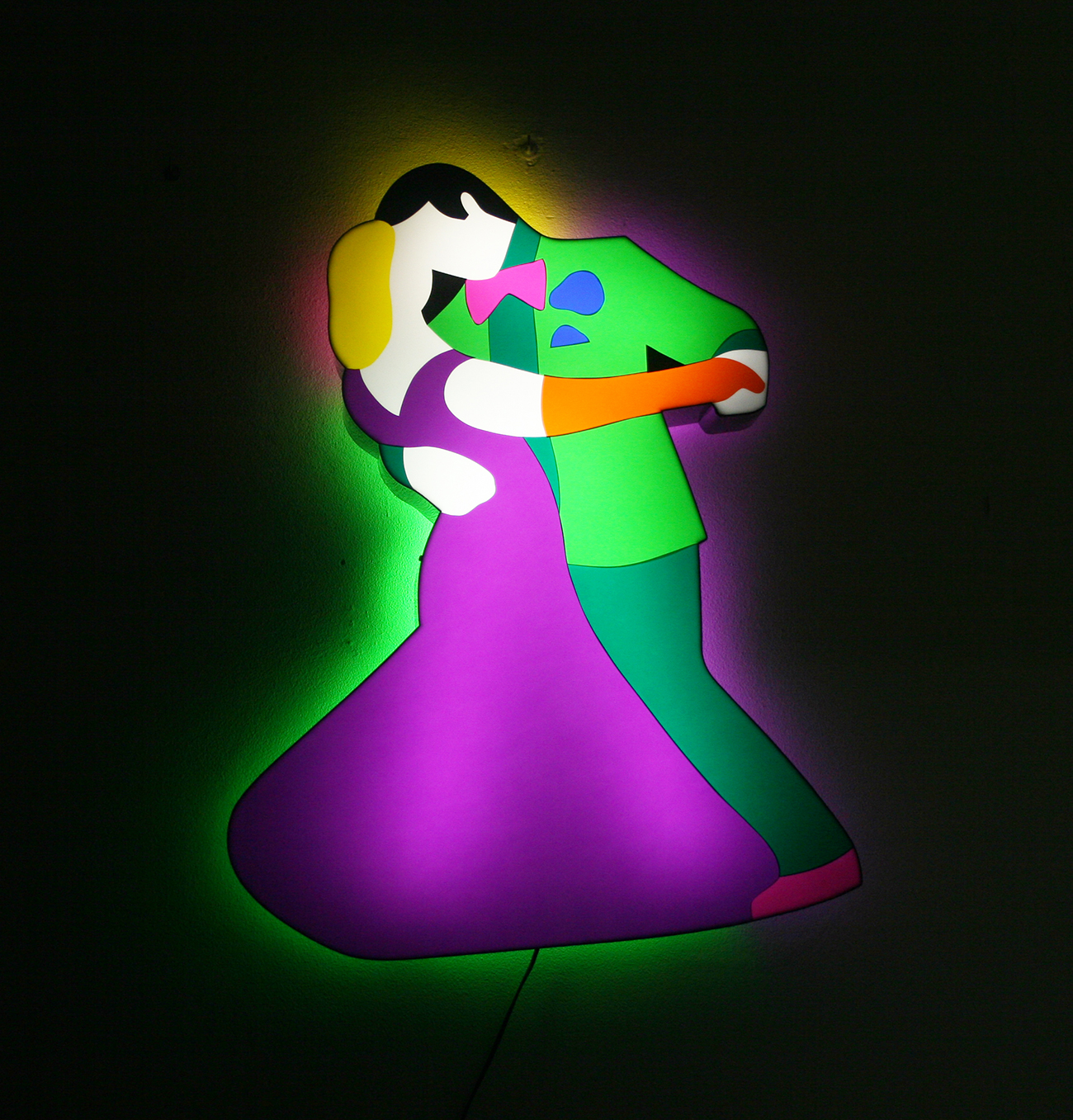 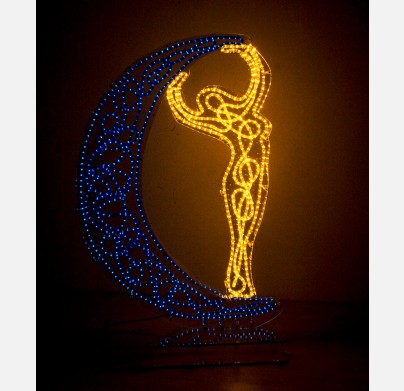 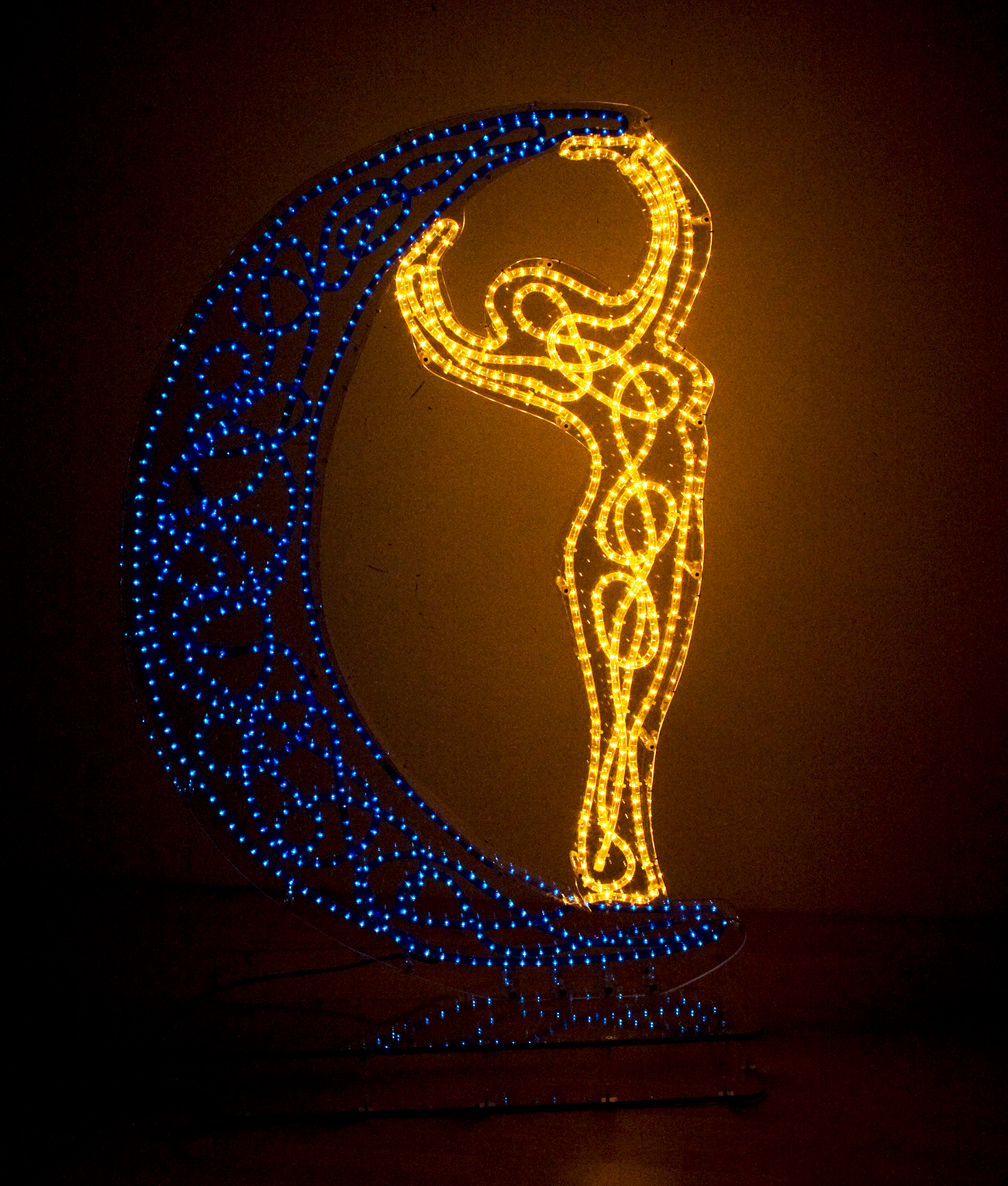 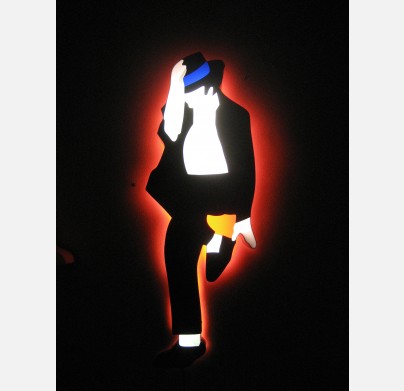 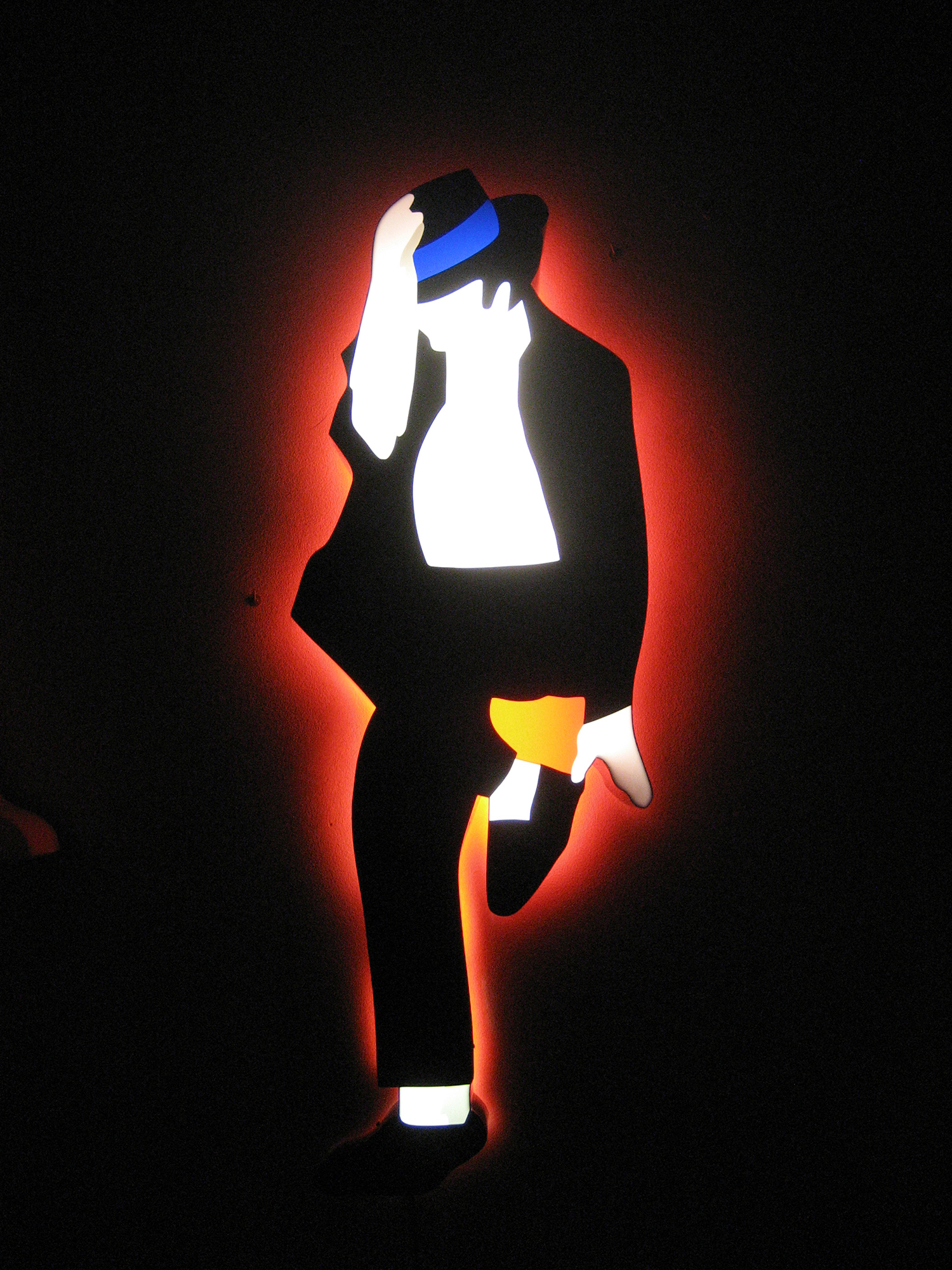 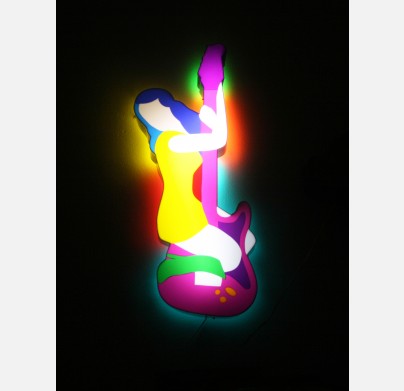 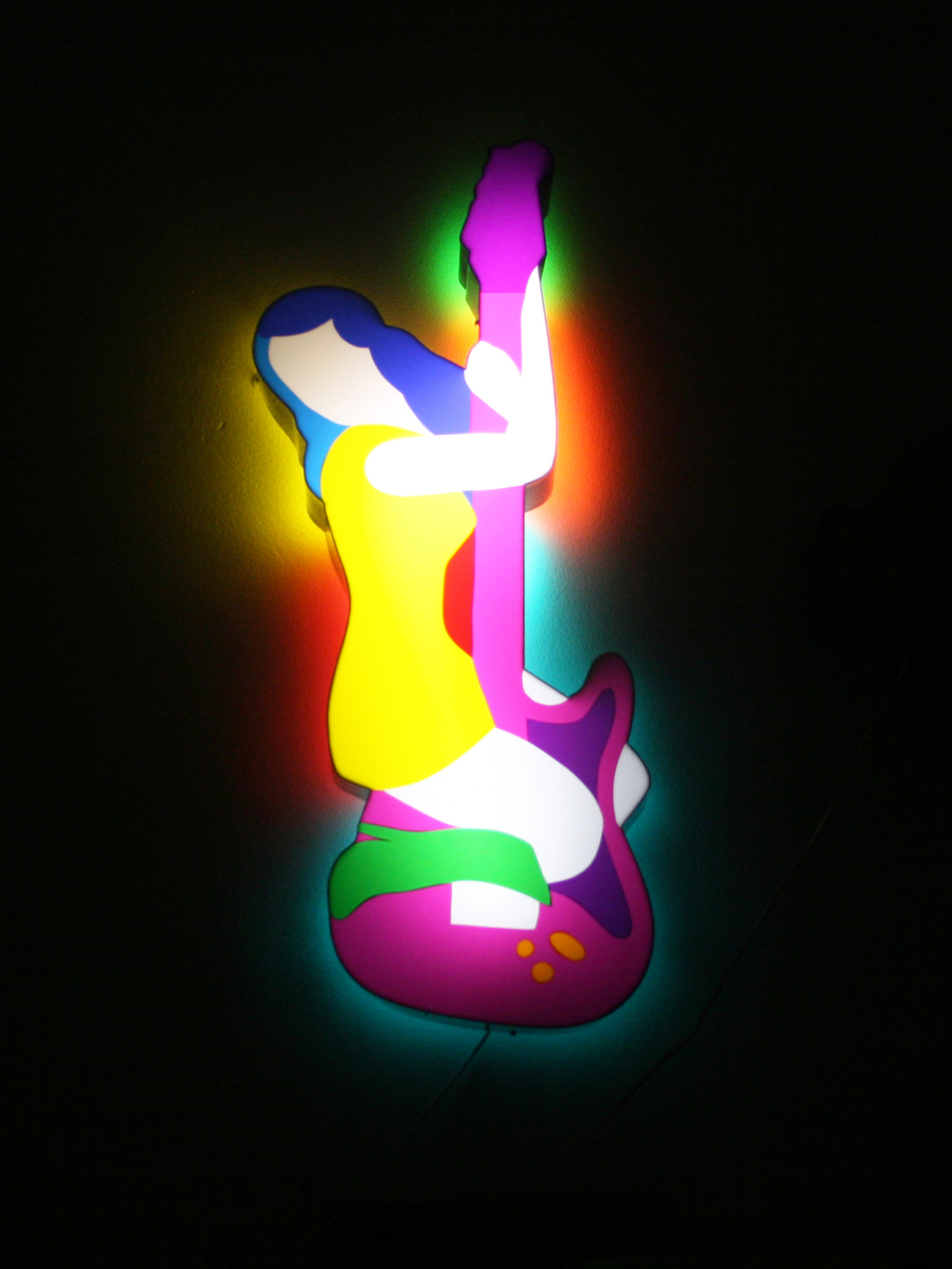 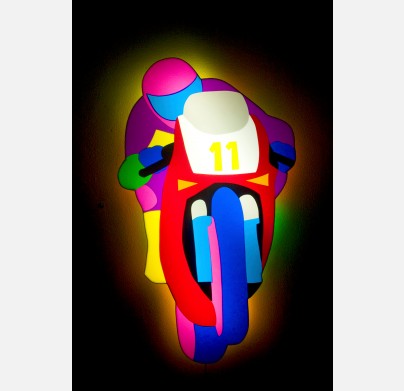 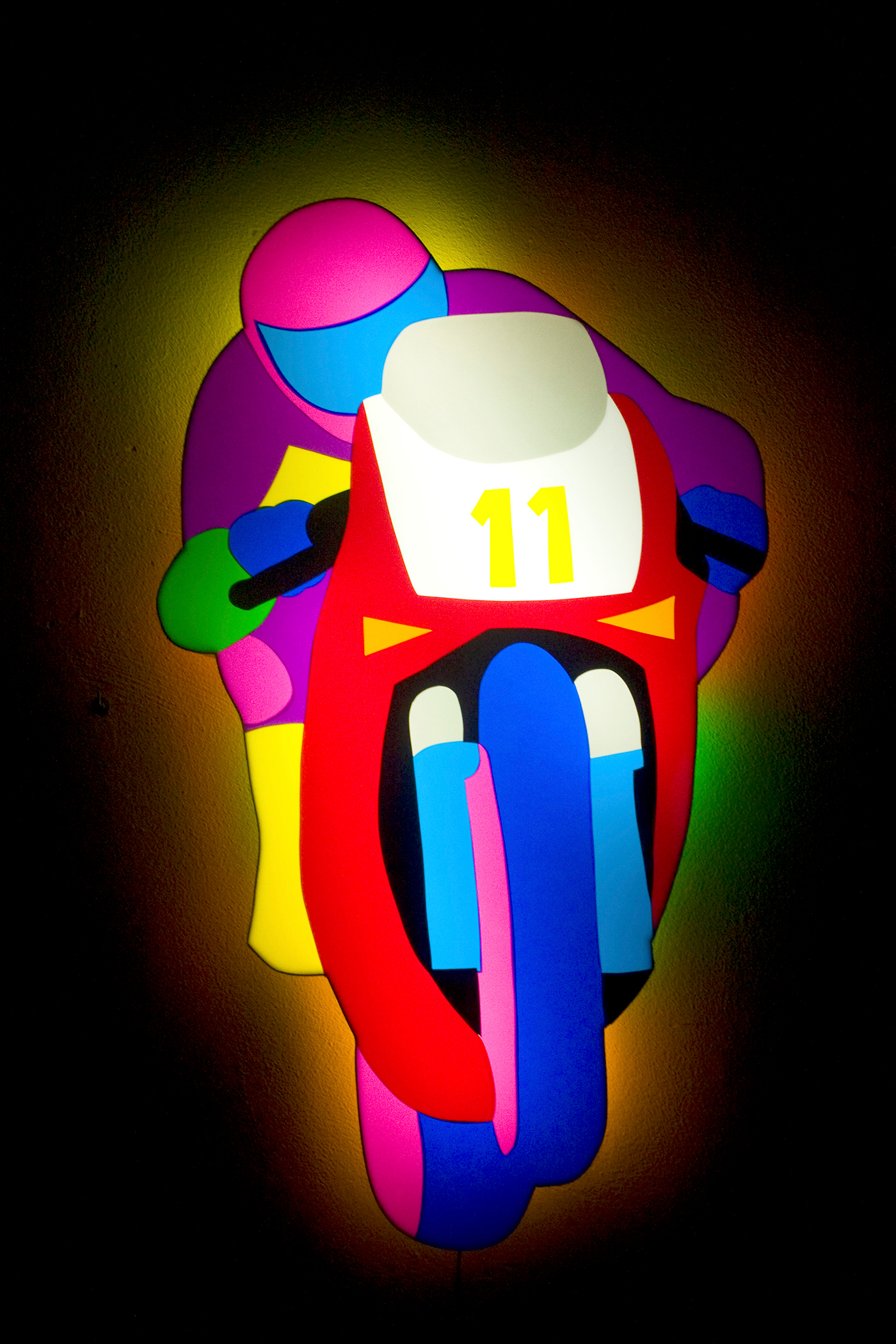 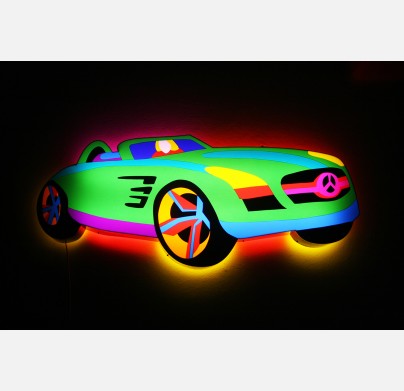 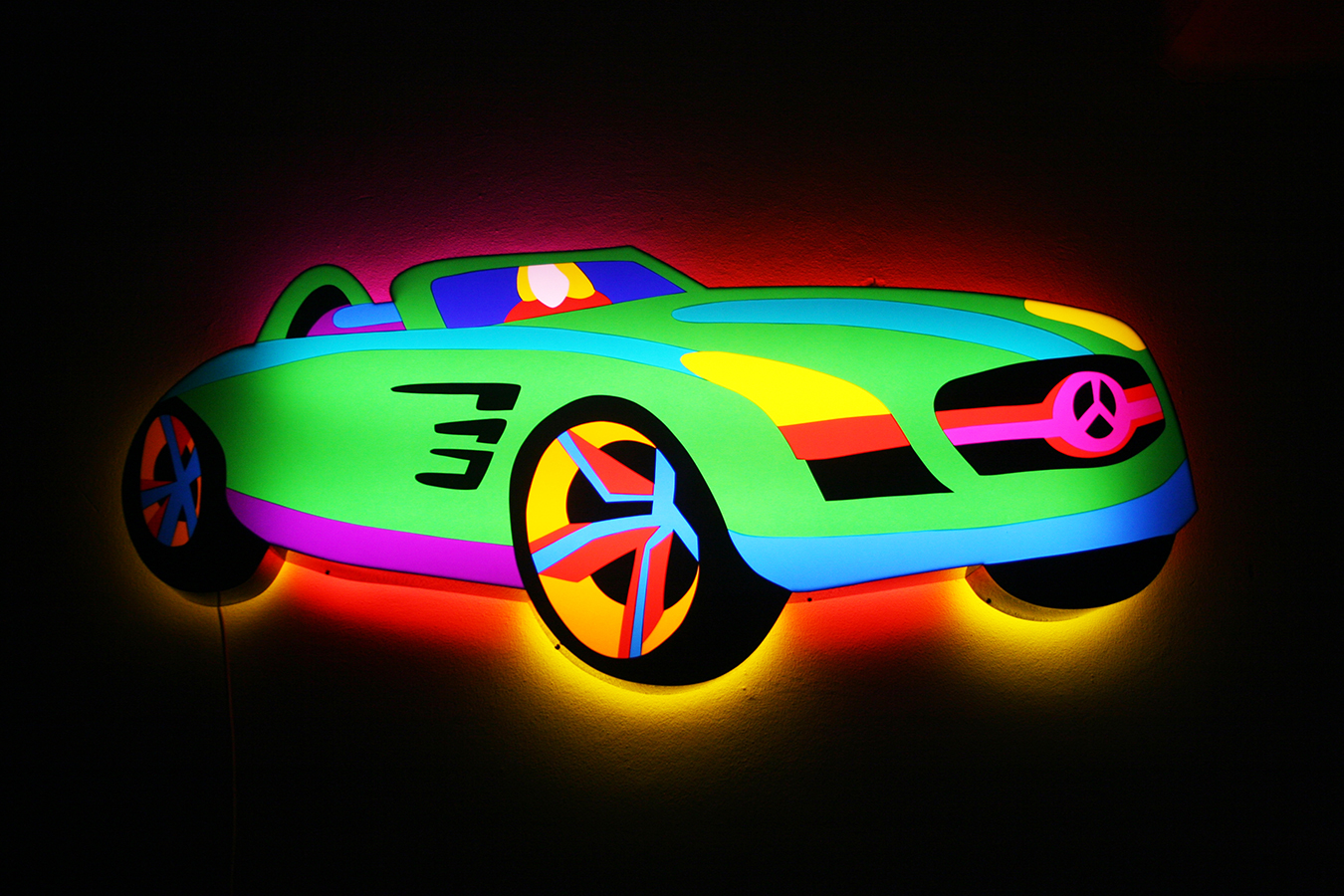 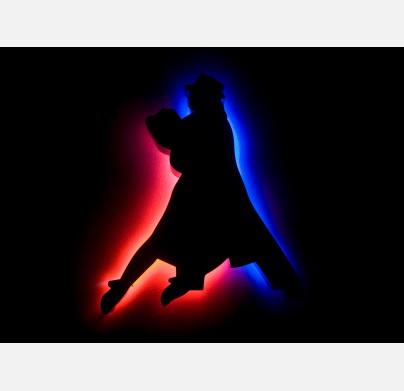 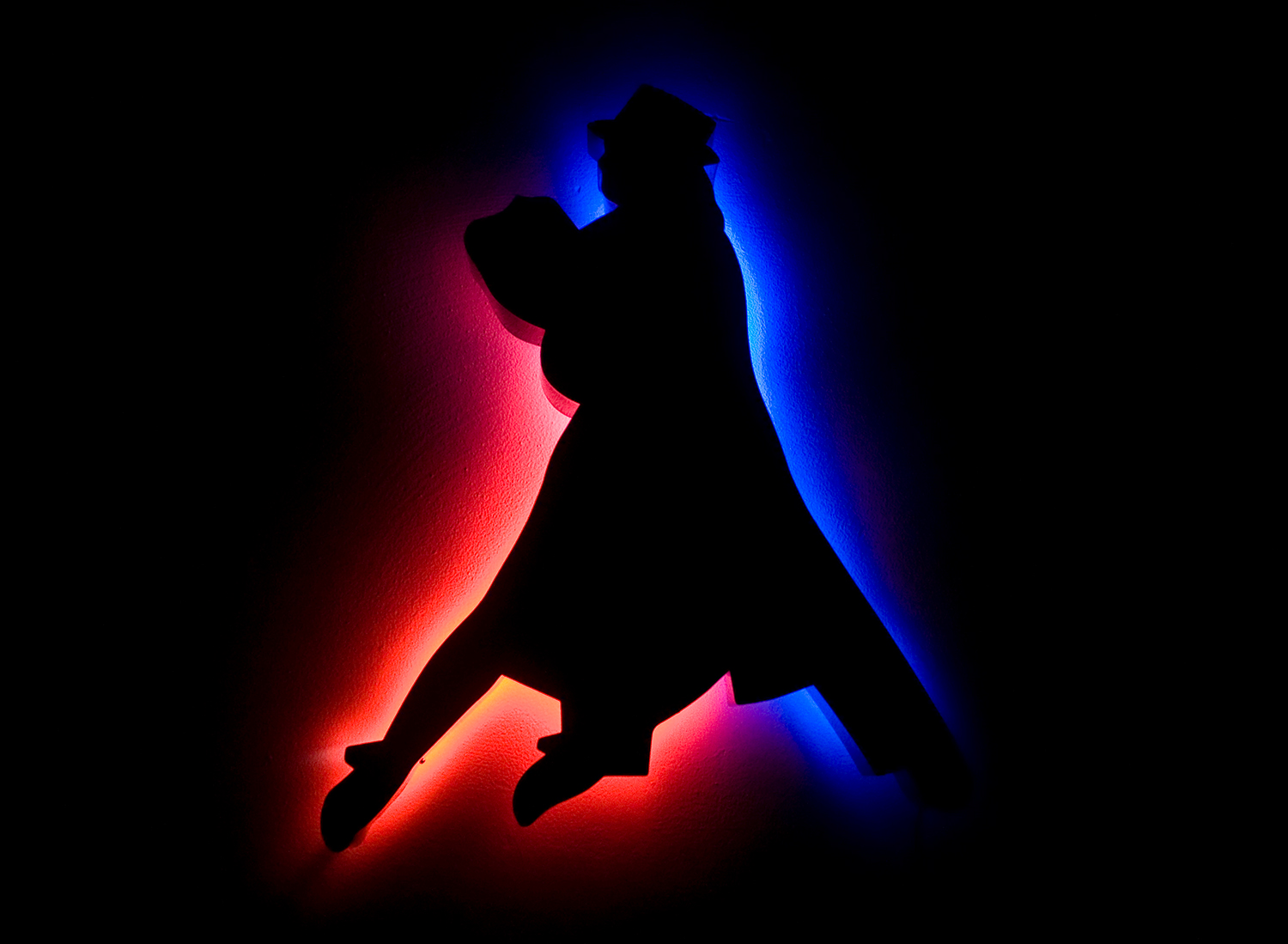 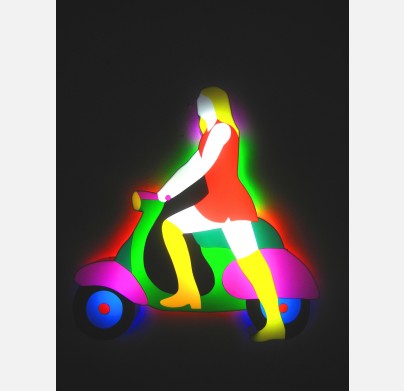 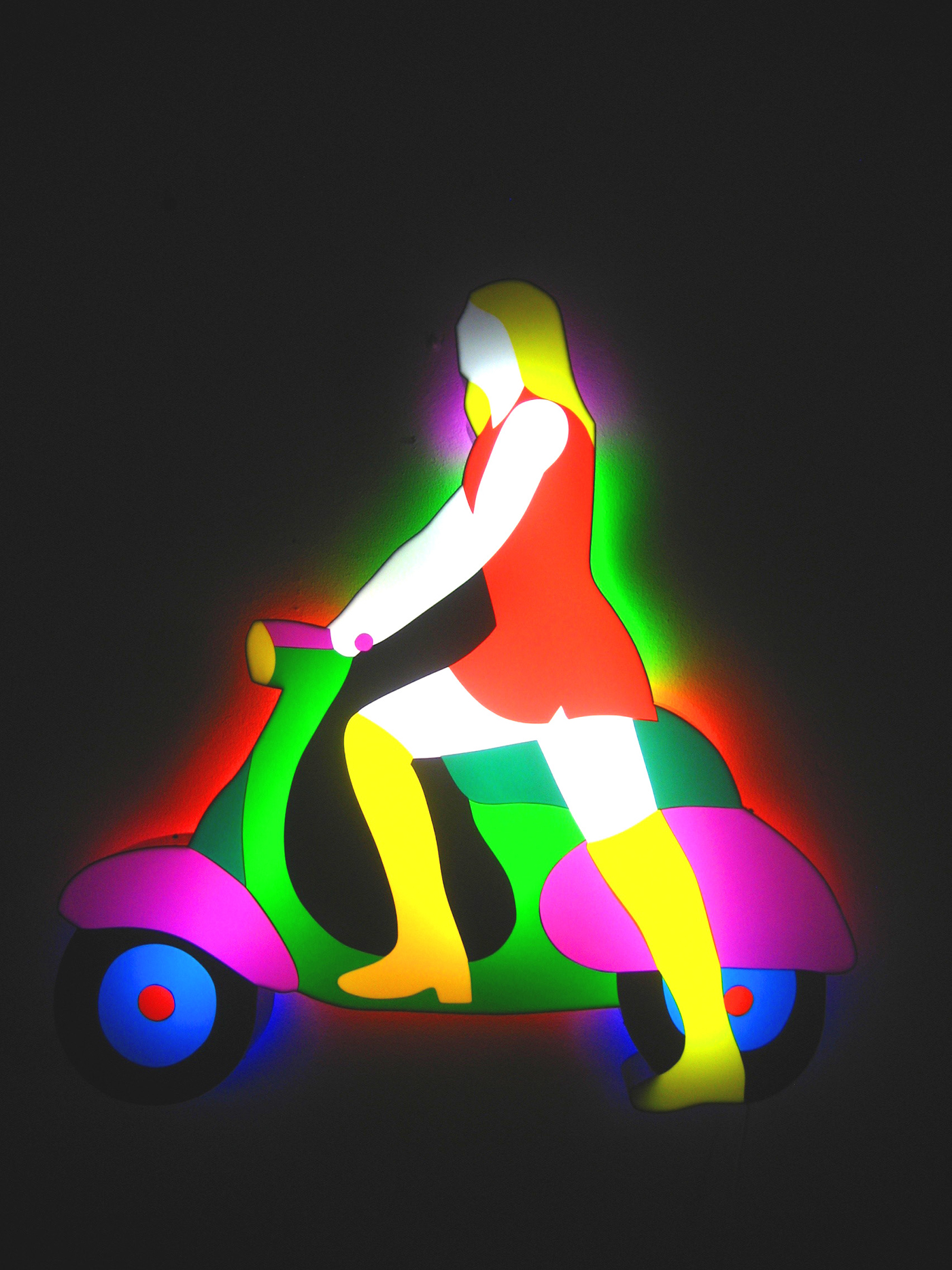